There are many reasons to go cycling in the Netherlands. For starters, the country is mostly flat, and let’s not forget the bicycle friendly infrastructure. Yeah, you gotta love that infrastructure.

We can consider ourselves lucky to live near the Belgian / Dutch border, yet when it comes to cycling, we somehow seem to plan our rides in Belgium most of the time. Okay, there’s the occasional coffee ride to Kamu in Breda, and on our weekly rides we tend to cross the border once or twice, but actually cycling in the Netherlands? We just don’t do it enough. Time for a change.

Ann had a couple of Dutch cities in mind she urgently wanted to (re)visit so she wanted to know if I would join her to Dordrecht or maybe Delft. “Easy doable by car in a day” she said, but I was already two steps ahead.

If a quick look at the map taught us one thing, it was that we could easily visit both cities by bike.

And since we both had time, we added some more cities to the list. By now you know how we roll, right?

Since Ann was keen on visiting Dordrecht, I plotted a route there from our hometown Turnhout. Much to my surprise this was only a mere 82 kilometers. If we’d leave early in the morning – say 8 o’ clock – we would have oodles of time to visit the city.

Here’s a little tip for you: the eve of a 4 day cycling trip is probably not the time to go partying till early in the morning. It was well past 9 when we got out of bed, a little bit hung over, and if I remember correctly, we only got on our trusty steeds at 10.30 or so. We might have left the house later than planned, but we still managed to arrive in Dordrecht early afternoon as planned. Probably cause compared to our summer trip, we didn’t have that much luggage with us, so we were a tad speedier than expected. Good times were had in Dordrecht, lovely city and extra kudos for the Arthouse B&B we were staying in.

The next day, our ride would bring us all the way to The Hague. I plotted an 80 kilometer from Dordrecht to the Unesco World Heritage site of Kinderdijk, famed for its windmills. Pretty as picture, but unfortunately also a nice indicator for the headwind we we’re facing. The schedules of the waterbuses (in Dordrecht as well as in Kinderdijk) perfectly matched our ride. We arrived, bought tickets and away we went, so no time was wasted waiting. That’s how I like it.

From Kinderdijk it was straight to Rotterdam for a coffee stop at Zwaan Bikes and a light lunch. Getting out of the city was a bit harder than expected because my Garmin decided to call it quits mid ride. Then again, we can work out good ole street signs like pro’s. Next stop of the day, Delft!

Much like anywhere else in the Netherlands, the ride from Rotterdam to Delft took us alongside riverbanks with the odd windmill here and there. And as soon as you leave the busy cities, you often have the rural cycle paths all for yourself. After a quick coffee stop and a visit to the local plant shop we were on our way for the last 10K of the day to The Hague. Just love it when all these cities are so close by!

The Hague was fun by the way. Walked the city, had a healthy dinner at Sla, and finished with some drinks in a random pub near the place we stayed. In the morning we cycled to the coast (Scheveningen) and had breakfast at Lola Bikes and Coffee where our little bikes were the center of attention. As soon as we downed those lattés and pastries we continued our trip.

With 99 kilometers, the third day was the longest one on the bike. But hey, the sun was out and we were on a roll. We took the opportunity to take some obligatory Brompton / street art pictures, had a nice vegan lunch in Gouda – yeah, no cheese for us that day– and set sail to Utrecht.

The last few kilometers we event tailed some ‘oldtimers’ – or at least tried to – on roadbikes. We crossed the center of Utrecht during rush hour, which actually is a strange sort of well-organized bicycle madness. Oh, and one has to take a picture with Miffy / Nijntje, right?

Before we headed home on the last day, we had a relaxed ride through Utrecht. We visited the famous Rietveld Schröder house and cycled past some other houses of the same architect.

We decided to catch an early train to Tilburg as soon as it started to poor down. But not before checking the world’s largest bicycle parking at the central station, that goes without saying.

The sun was out in Tilburg so we did a quick spin around the city. Turns out, Tilburg is pretty damn cool nowadays so we’re definitely coming back. The fact that the sky was getting darker and darker was our cue to start pedaling home. Luckily for us, my weather app told us we should keep it dry. Well…that didn’t happen, now did it? 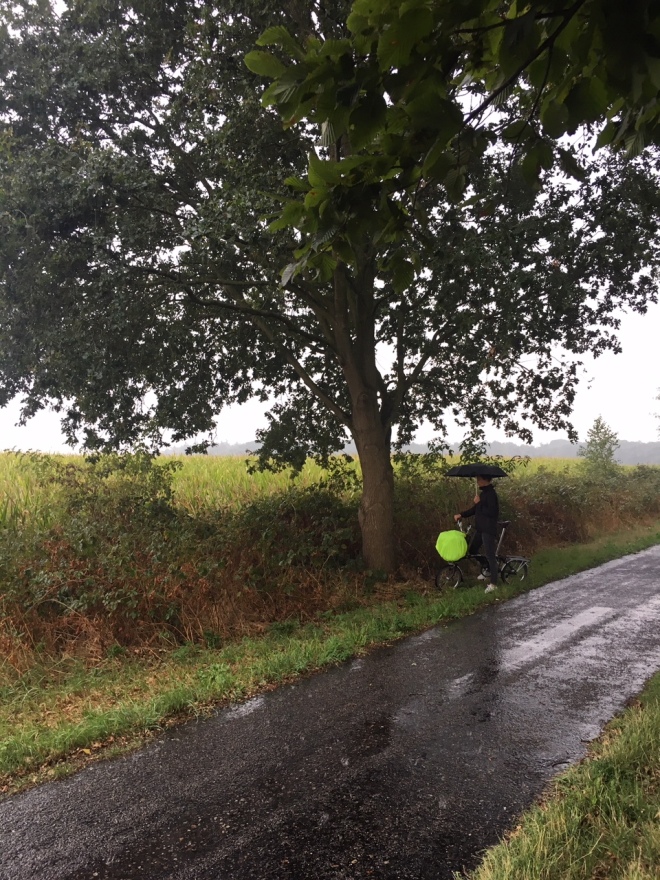 Really enjoyed our 4 days cycling through Holland. Definitely something we’ll do again, and actually, so should you!