Sea to Sea, Coast to Coast, C2C… the ride from Whitehaven to Sunderland in the U.K. is known by many names. Don’t really know when the idea popped in my head to actually ride the C2C, but the fact is, in April I actually dit it. On my Brompton. Obviously, ‘cause it’s a proven fact that no other bike is easier (and cheaper) to transport on planes and trains than my trusty small wheeled steed.

While my better half was away for work, I thought I’d use my regained liberty to go visit my sister in Sunderland for her birthday. And with Sunderland being the endpoint of the Coast to Coast, it was a given I was going to ride my bike? Somewhere in December I was trying to sort out all the practicalities (think route and lodging) when I got reacquainted with Kev, an English buddy of mine (who I hadn’t seen in ages) and avid mountain biker.

An airline gone bankrupt, a delayed flight, a missed connection… getting into the U.K. turns out to be hard as fuck at times

When I told him about my plans, he not only wanted to join, he also suggested he’d sort out everything when he was back on the island. Added bonus, he’s a fully licensed ride leader, so yeah, I got lucky there. It was agreed upon that we would do the ride in three days to fully appreciate the scenery rather than to race through it.

An airline gone bankrupt, a delayed flight, a missed connection… getting into the U.K. turns out to be hard as fuck at times, even with all the right papers. But hey, in the end I eventually got there. I teamed up with my 2 co-riders at the Newcastle train station where we would catch a train to Whitehaven. It would take us another three hours, but luckily we had some cans of beer with us. All aboard!!!

No better way to start a ride day with a proper English breakfast. A slice of toast, black pudding, beans in tomato sauce, bacon, sausages, eggs… the works. You have to fuel the body in order to get the motor running, now don’t you?

We made our way to the Whitehaven harbor to dip our rear wheels in the water – an obligatory ritual when riding the C2C – and away we went. Since Kev sorted out all the routing, I had no idea what our ride would be like, nor did I expect the English countryside we’d cut through to be as marvelous as it actually was.

I mean, the Lake District on a sunny day is nothing but stunning and definitely worth the occasional stop to enjoy the view. Smooth tarmac, the odd stretch of gravel, rolling hills and a couple of steep climbs… No, day one did not disappoint one bit and neither did my Brommie.

After having a basic breakfast in the morning – toast, cheese, marmalade and some oats – we set out for the second leg of our three day trip. On today’s menu were two infamous climbs that go by the names Hartside Pass and Garrigill. It was obvious to my co-riders I wasn’t able to climb these two fuckers with my Brompton, especially not since I was struggling with my lowest gear. To me, it all just sounded like an extra challenge. 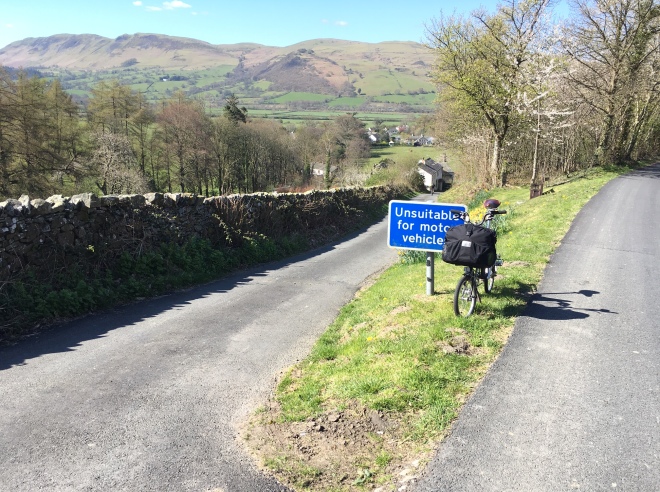 First up was Hartside pass, which turned out to be an 8 kilometer long uphill ride, climbing 414 meters at an average gradient of 5.2 % (max 7.9%). It wasn’t all that hard, even on a Brompton. Managed to reach the summit first, only to find out that the café had burned down years ago. Slightly disappointing, but the view definitely made up for it. When the other two reached the top and had their well-deserved rest break, it was time to hit that downhill and put the brake pads to the test. 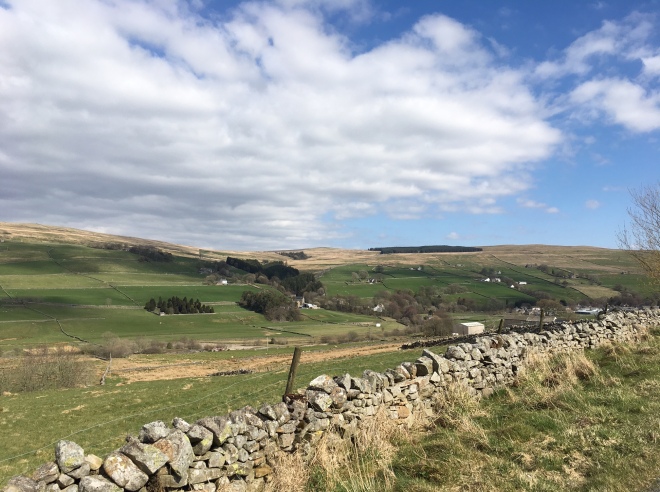 After speeding through the local scenery, we reached Garrigill in no-time. Hell, we could see it from afar and this one wasn’t going to be easy at all. Here’s the stats: 2.8 km long, 247 m elevation gain, average gradient 8.7 %, max gradient 16.5 % (but I’m sure my Garmin said 19% more than once). Easy it wasn’t, but it felt awesome to reach the top as the first of three. Not that it matters, but I was riding small wheels, now wasn’t I. All in all it wasn’t that far until we reached Allenheads where we conveniently stayed in the local pub. Time to get our drinking game on.

Our final day on the bike started with a rather hefty but beautiful climb out of Allenheads. As the scenery changed so did the animals. There were fewer sheep alongside the road, but oodles of grouses.

At a certain point two of us took a different road since the off-road part surely wasn’t feasible on a folding bike. I begged to differ, but in the end I took the wise decision to stay on the road. We tackled numerous climbs that would perfectly fit in at any official UCI road race somewhere in March or April.

Halfway we had some cake at a stop and from there on it was all downhill on nice stretches of gravel, forest paths and slightly less rural roads when approaching Sunderland. The last bit that followed the river took us straight to the coast where I dipped my front wheel in the sea, officially concluding this trip for me. Beers were shared, good times were had, and that one single puncture – not mine – didn’t even remotely count as rain on our parade. Sea to Sea, Coast to Coast or C2C… it’s a ride I definitely recommend! 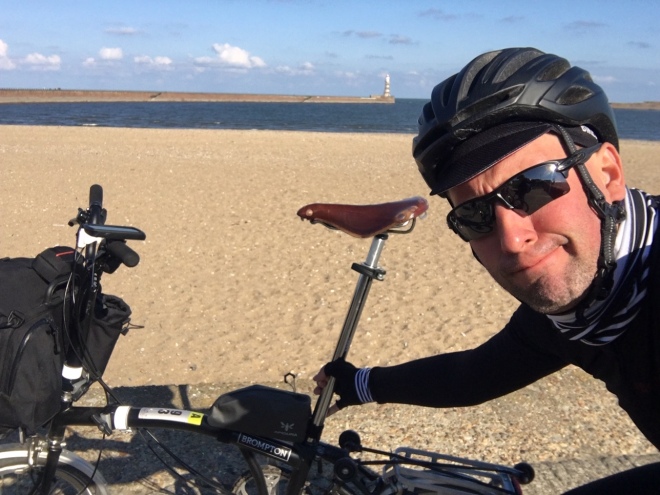